This vignette will create a forecast of possible outcomes for a population of interest, such as a rare species.
These are examples of null model construction using simulators, to help showcase possible uses of SkeleSim.

Skelesim involves several steps of operation. First you will perform some basic setup tasks like setting a root directory, file naming, and choosing a simulator. Then you will define your first scenario. Additional scenarios will be easy to add after that. Each step occurs through a GUI interface. At any time you can also see “under the hood” by looking at the skeleSim object, which has all parameters of all scenarios (and more).

Objective: To create a forecast of possible outcomes for a population of interest, such as a rare species. Say the species has already been genotyped at its current state, and managers would like to know what will happen to the population in 50 years (1) if no management action is taken or (2) if management is taken to connect this population to another population. You will want to compare number of alleles that exist in your population under both of these actions: no action and reconnecting populations.

The skeleSim interface has multiple tabs. You will initially need to go through all the tabs in order to define your simulation parameters.

Actions tab- saving and loading. The first tab “Actions” is used when you are ready to run your simulations (not yet!) or if you have already run some scenarios and want to add a new, different scenario, so you want to upload an existing skeleSim object (nope, not yet). These actions will be covered later. You will want to set your 'Simulation Root Directory'.

The first thing to do is to click on “Help Choosing Simulator”. This tab is to help you decide whether to use a forward in time or coalescent approach. 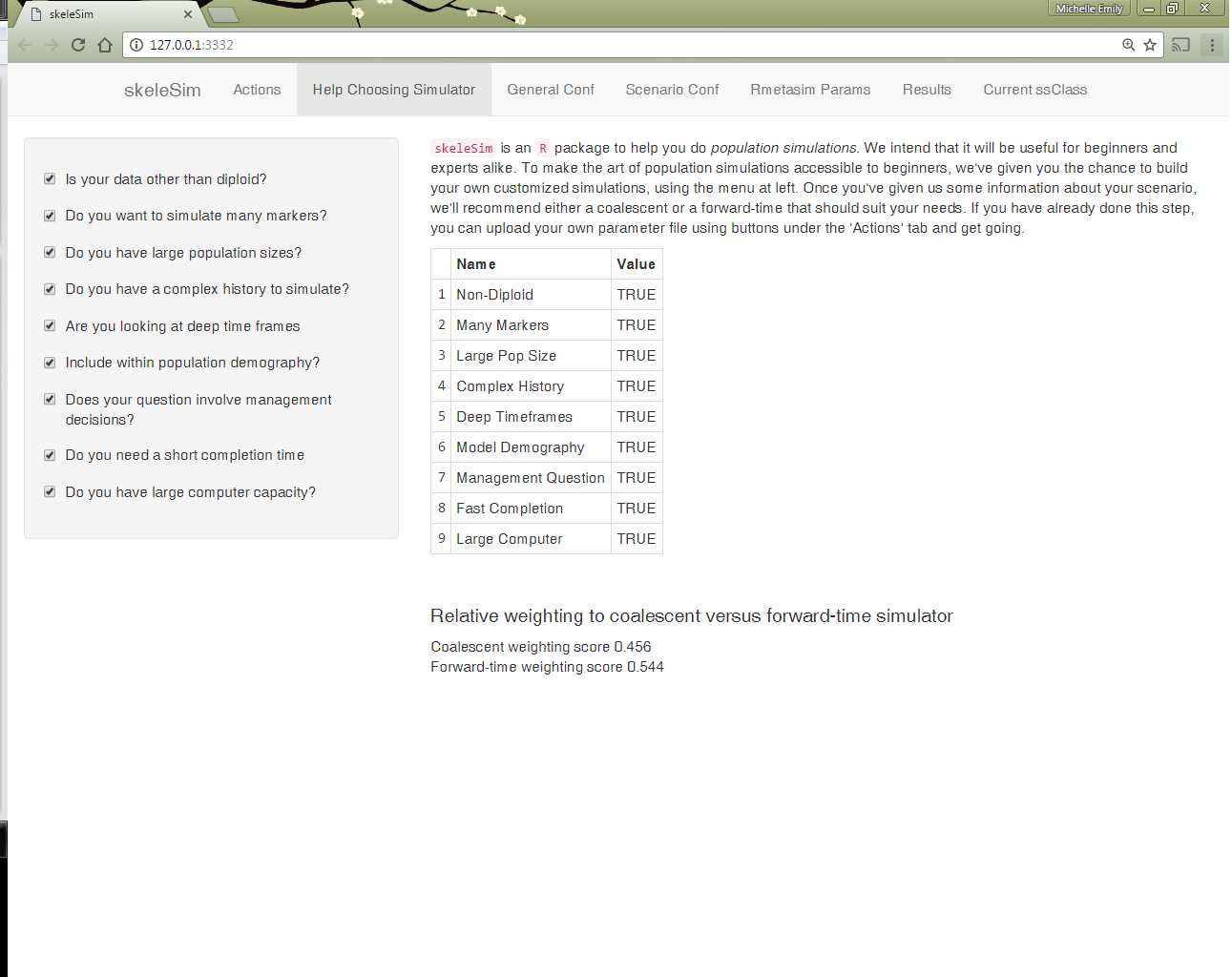 General Conf Tab: General parameters of skelesim. Since you already know you want a forward in time simulation, move on to “General Conf”.

Scenario Conf Tab: Population/ sample size, migration, loci Next go to the tab “Scenario Conf”. This is where most of your simulation parameters will be defined. Note that there is a tab structure within this tab: “Population characteristics,” “Among population migration rate” and “Locus characteristics”. We'll fill out each of these in turn. First though we must fill out the box on the left. This defines the very basics: number of populations, etc. 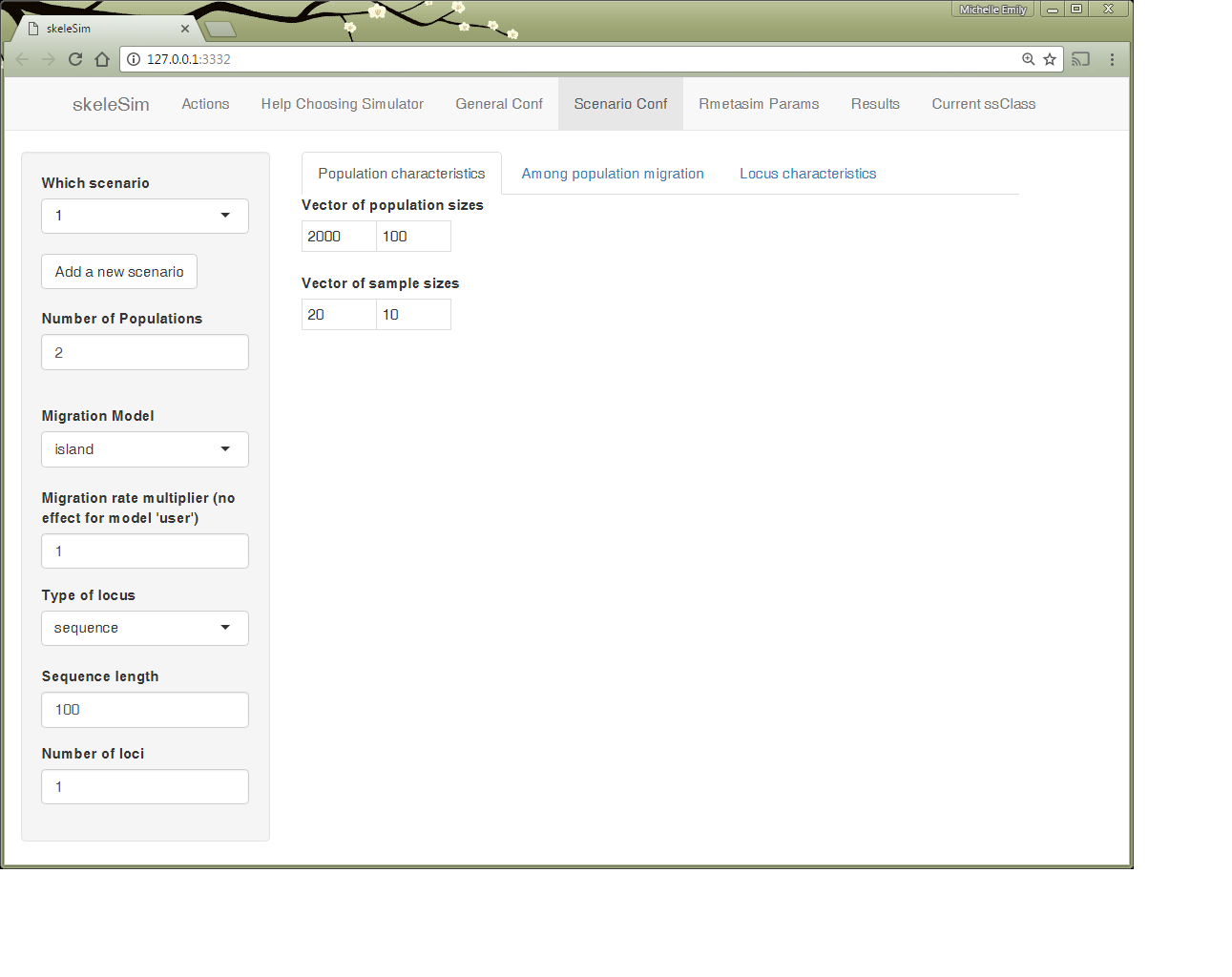 Our simulation is going to be for two disconnected populations that may or may not get connected via management.

Now click on “Among population migration rate”. This page allows you to set each pairwise, directional migration rate (from and to each population from each other population). Our first scenario is going to assume no migration at all, so select “user” under the Migration Model and enter zeroes in each box. Note that on the left there is a pull down menu which has different migration models: 2 dimensional stepping stone, etc. (You can try each of these to see the available options and what each looks like.) 'User' means that you will manually define each cell of the matrix- the other options help fill out the cells with internal calculations. Distance means that a user defined function of dispersal must be given. 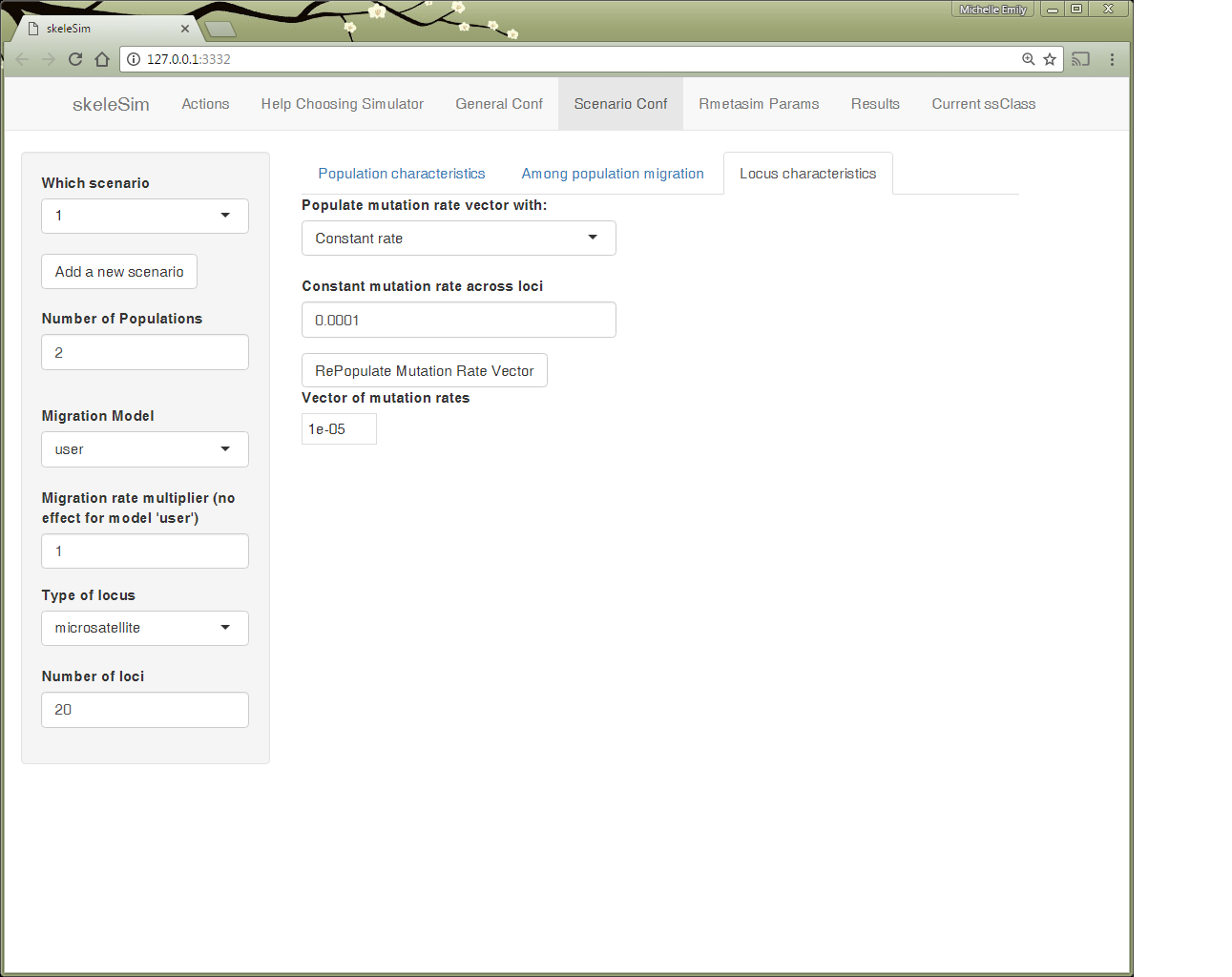 Now that you have defined your first scenario, you can click on the “Current ssClass” tab at the top. This will show you 'under the hood' all the slots in this object. You can see all the parameters that you just set by looking at “@ scenarios :List of 1”.

First Save. It's now a good point to save the current object. Just go to the “Actions” tab and click “save skelesim parameters to a file”. Just type in a filename.